Back to the norm

I was waiting to update until after Jax saw his surgeon on Tuesday so I could give an update. The appointment turned into an in-office procedure and we were there half the day. Jax got numbed up and the doc cut into his incision to look for the stitch that apparently doesn't want to dissolve. He couldn't find the stitch, but to cover all his bases, he uses silver nitrate to cauterize the area. It's healing up well so far and hoping this is the end of it! Jax is such a trooper.

Jax was off of school for 10 days though because the cold he had did turn into walking pneumonia like Brady's, so he had to take an extra day off for the medication to work and then it was a 4-day-weekend off of school.... neat! So, everyone is back at it. I also was given meds from my doctor, so we are all finally back on track.

The boys are in full swing of basketball, and I was able to capture a short video of how the kids and coaches are introduced for each game, it's FANTASTIC! Jax was recovering really well by the time he had his game on Saturday, but the tail end of a cold and an early morning sport equals a little disaster for Jax. He puked up mucus on himself during warm ups and then had an asthma attack during the game prompting me to jump in and have to rush him to his backpack for his inhaler (which he had a full nebulized treatment an hour before all this). Nothing like an entire gym of people nervously watching this little boy take breathing meds to see if he'd be ok... ugh. He'll be better this weekend I'm sure, but I can't wait until the games start to get later each year (the younger kids go first thing in the morning). 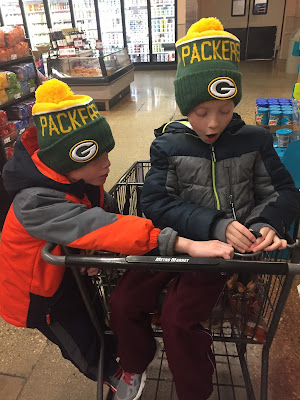 Apparently our house likes to go down in health this week every year! I have no idea if my essential oils help THAT much with our immune system, but I ran out of my specific 'immune combo oils' last week for about 3 days, and Brady started a cold. It may be coincidence of course, but my goodness!
It's so hard to contain colds between the boys since they pretty much sit on top of each other when playing video games, playing on the iPad or reading books. And they're little boys, so they're gross in general with their germs.

The boys each had their "half birthday" parties at school on Thursday. Brady's teacher told me she could tell he wasn't feeling well. He had a cough and gross nose, but seemed OK at that point. It was the same on Friday, and the boys even went to a birthday party that night, which gave Jay and I the opportunity to go down the street to a dinner alone (AMAZING). Brady had energy and seemed to be fine. Well, later that night he suddenly spiked a fever. And with so much history with Jax, I know that spiking a fever on day 3 of a cold can mean trouble. Sure enough, Brady was up hacking all night long and he was down and out on Saturday. (sigh) Poor kid.
I called his pediatrician (who had no openings that morning) and the nurse said he needed to be seen for sure, so I brought him to a children's urgent care. Turned out he had 'walking pneumonia', but we caught it early, so he's bouncing back quick after some medication. He stayed home Monday and is back at school today with a checkup with his doc after school and then we run to basketball.

Now Jax... he seemed to escape the cold, but then started a cough (along with me) on Sunday. He was doing fine until last night he coughed non-stop. So, Jay and I were up and down all night giving him breathing treatments. His pulse ox was fine all night and he never started a fever, so we'll just continue to treat and hope he purges it without complication. He was home Monday as well, so our house is kinda a big ole' germ fest. I'm disinfecting everything that I can today in hopes that Jay doesn't get it. Jax will get breathing treatments every 4 hrs at school, so hopefully that just helps him get through the day. Jay and I take bets on if I'll get a call to get him... ya never know with that kid!

Jax also has an appointment to see his surgeon next week Tuesday to see if anything needs to be done with his incision. It keeps exploding and then crusting every 3 days and the nurse told me over the phone that a stitch is trying to get out. If it doesn't fix itself by next week, we'll see the doc. He'll see if he can do anything. The worst case scenario is surgery, which is NOT on my radar as an option, so I hope they figure it out!

Jay and I met with Jax's school team on Thursday and it was a good meeting. Our fears of Jax disrupting the class or having some behavior issues were squashed. The teacher said that Jax gets impulsive and shouts things out just as much as any of the other 'active' boys, so he doesn't have any outstanding issues that way.
As for his breakdowns at home with homework, they just don't want to send any home anymore. Which sort of upset me, because I don't like him to be treated so differently or for him to get a free pass (which could keep him from progressing in school), but they said he has a pretty severe fine motor deficit and we're just torturing him with 'making him' use a pencil. He'll of course read (which he loves) and do his math program on the iPad.
They are downloading a keyboard app for his iPad at school and sent the link to me to get him for home. They truly don't believe he'll be much of a penmanship writer and he will just have to be a keyboarder and be tested that way instead. That bothers me too, like we're just giving up on his motor skill, but the special ed director reminded me that Jax can't even drink from a milk carton without a straw, so we need to keep him excited and happy about school and not to push too hard on areas he truly can't help. I get it, I do. I just need to ease into some of these things that I expected he'd be able to do.
One area that really confuses us and the teacher, is that Jax is way above grade level for reading and he does it with ease, but yet he can't spell well or recall details for stories or drawings. The teacher said that students typically exceed or struggle with reading/spelling together rather than being able to do one and not the other, so he's such an enigma!
The good news is that the teachers all said he's super happy, has tons of friends and people gravitate toward him, so being in the special ed program with all his aides and therapists aren't affecting him on a social level. I think it's important for parents to hear that since we'll always worry.

We've had a quick week of busyness. The boys started Upward Basketball with practice on Tuesday nights and games on Saturday morning. Jay is the coach and considered a "Spiritual Farmer"...
The league is Christian based at a large non-denominational church in our area, so it consists a lot about character and team building instead of just learning how to play. So far, it's much more organized than what we did last year at the Y, and I think it will go well.

The boys have been loving all the NFL playoff games this week and talk about it nonstop! This upcoming week is even busier with some fun upcoming events. The kids have their 1/2 birthday celebration at school on Thursday (how cute/funny is that?), then a birthday party of a classmate on Friday night and then some more playoff craze in our house over the weekend.

Jay and I will be meeting with Jax's school team Thursday night to discuss his progress so far. Most notably to discuss his challenges with focus, fine motor and keeping his motivation going since he gets so discouraged and upset with homework (basically anything that requires a pencil, marker or crayon causes a breakdown). So, I'm hoping for a good meeting and some adjustments or at least suggestions.

Our holiday tour is finally complete. December was pretty crazy with all the travel and things going on. My brother Adam came in town from Portland, OR and we had 2 days of travel. It all worked out well, although my poor brother got caught at the airport for 2 days trying to get home when a snow storm decided to come!

The week after Christmas was really nice to have to get caught up at home. Jason was in and out and we still found ourselves to be busy! We took down the Christmas decor today after church and think we're ready for the typical chaos to start back up tomorrow. The boys start basketball on Tuesday, so they are really excited about that. We're hoping to meet with Jax's team at school to discuss his current progress and how to help more at home since he's really struggling to sit down with homework (most notably having to write). His teacher emailed me back saying they would get the team together and let me know some times they could meet, so I'm interested to see how that goes. Otherwise, I'm hoping for a very uneventful couple of weeks to get things calmed down here for awhile. I'm happy to see 2015 gone and hoping for a much less dramatic 2016. I know life will always have ups and downs, but there were too many extremes for me in a one-year time frame. We had some great positives of course, which we're so grateful for. I'm sending up some major requests of simplicity to the Heavens...

No news is good news in this house. 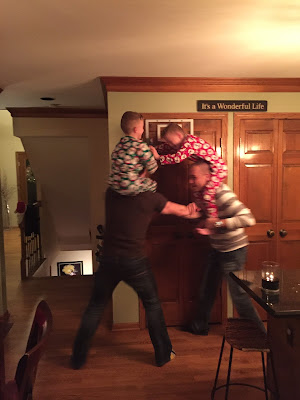 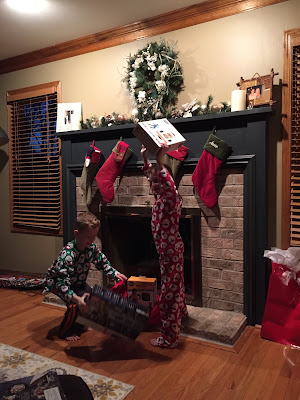 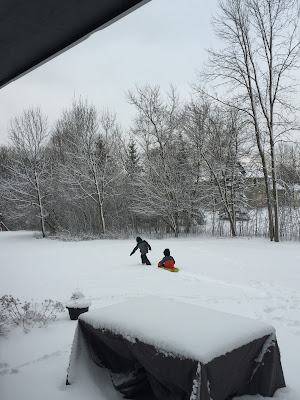